Set the EGG for direct cooking without the convEGGtor at 400°F/204°C. Add the Dutch oven to the grid to preheat.

Combine chicken stock and saffron in the Dutch oven and bring to a simmer. Add the clams, cover and cook until the clams open, about 8 to 10 minutes. Remove the clams to a bowl. Add the mussels to the broth, cover and cook until the mussels open, about 5 minutes. Transfer to a bowl. Make sure to discard any shellfish that didn’t open up. Remove the Dutch oven from the grill.

Brush the shrimp, scallops, the cut sides of the lobsters and cut sides of the lemons with some of the oil and sprinkle with salt and pepper on all sides. Grill the shrimp for about 1 minute per side. Grill the lobster cut-side down until charred and just cooked through, about 5 minutes. Remove the claws and the tails but leave the shells on; discard the bodies. Grill the scallops until slightly charred and almost cooked through, about 1 minute per side. Grill the lemon cut-side down until charred, about 45 seconds. Remove all ingredients to sheet pans or Big Green Egg Disposable Drip Pans and set aside.

Heat 3 tablespoons canola oil in a wok or paella pan over direct heat. Add the onions and cook until soft. Add the garlic and cook for 1 minute. Add the chorizo and cook, stirring occasionally, until brown and crisp, about 5 minutes.

Arrange the clam, mussels, shrimp, scallop, peas, lobster and piquillo peppers on the rice. Squeeze the juice from 4 of the lemon halves over the top, and nestle the 4 other halves in the rice. Scatter the parsley over the top. Stir gently to bring some of the rice up from the bottom. Serve while warm. 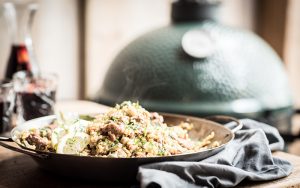 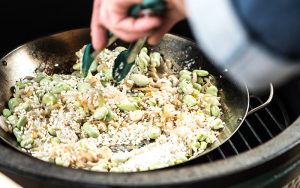 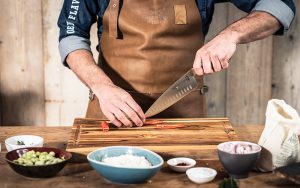 Have you ever eaten preserved salsify? When you make them on the Big Green Egg,…