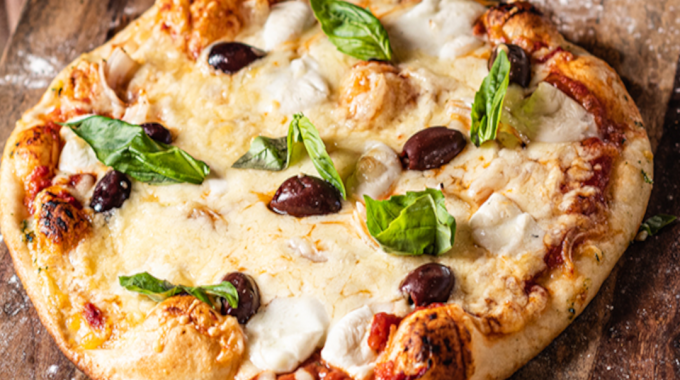 The Neapolitan Pizza Margherita, also known as pizza margarita, is one of the classic pizzas that every Italian restaurant in the world has on its menu. But you, of course, can make this delicious, traditional pizza just as well yourself on your Big Green Egg! The charcoal and the pizza stone in your kamado ensure a wonderfully authentic flavour. 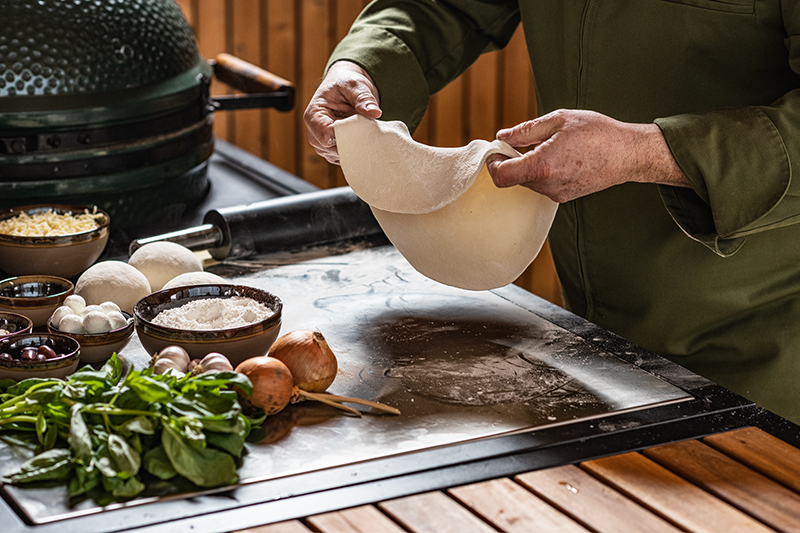 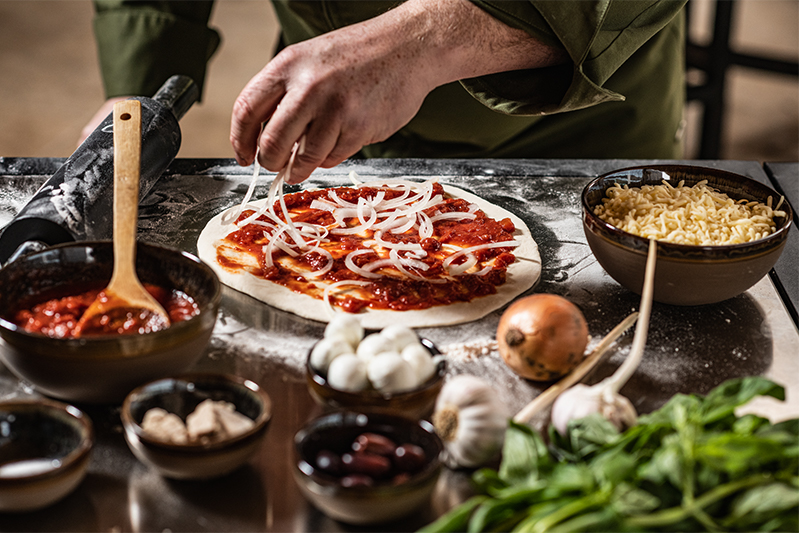 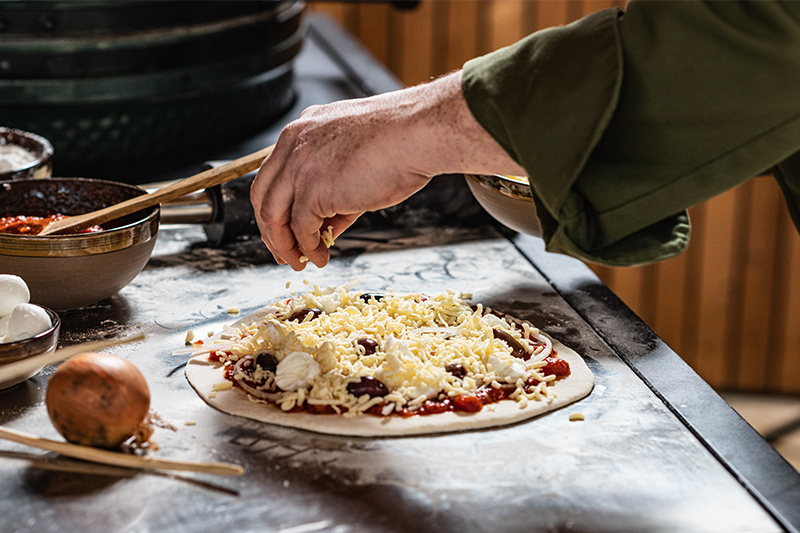 For the dough, mix the flour and yeast in a bowl. Pour in the water and olive oil and start kneading. When the ingredients are well-mixed, add the salt and knead until the dough is pliable and elastic.

Divide the dough into 4 equal portions and roll them into balls by folding the sides down. Place the dough balls on a cutting board, cover them with plastic wrap or a clean kitchen towel and let the dough rise for at least 1 hour.

In the meantime, light the charcoal in the Big Green Egg and heat to a temperature of 180°C with the Stainless Steel Grid. Make sure that you have filled the EGG with sufficient charcoal because you are soon going to bake at a high temperature. Peel and finely chop the shallot and garlic for the sauce. Halve the cherry tomatoes and finely chop the olives. Cut the basil leaves into thin strips. 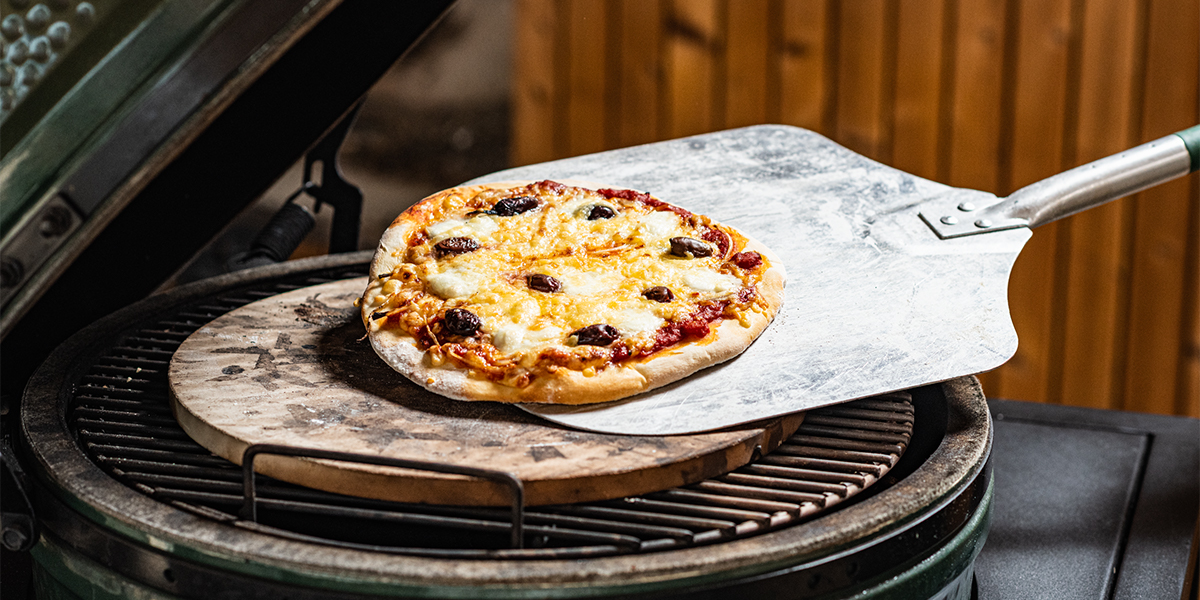 Heat the olive oil for the sauce in the Green Dutch Oven on the grid. Add the shallot and garlic and fry until the shallot is translucent.

Stir the ketchup, cherry tomatoes, olives and basil through the shallot mixture and let the sauce simmer for 4-5 minutes, closing the lid of the EGG after each action.

Remove the Dutch Oven from the EGG and season the tomato sauce to taste with salt and pepper. Allow the sauce to cool. Remove the grid, put in the convEGGtor and replace the grid. Place the Baking Stone on the grid and bring the EGG to a temperature of 275-300°C. Heat the Baking Stone at least 20 minutes so that it is very hot.

In the meantime, peel the onion for the topping and slice it into thin, half-rings. Cut the balls of mini mozzarella in half. In the meantime, on a work surface generously dusted with flour, roll out one ball of dough to a thickness of approximately 3 millimeters. In order to make sure that your dough does not stick, you can first roll your ball of dough through the flour on the work surface. While you are rolling out the dough, keep turning it one quarter so that you get a nice, round shape. Use your hands to make the edge of the pizza crust a bit thicker than the bottom.

Spoon 4 tablespoons of the tomato sauce onto the pizza crust and spread it out in circles with the rounded side of the spoon. Keep the thicker edge free of sauce. Distribute one quarter of the halved onion rings, 8 halved balls of mini mozzarella and 8 black olives over the tomato sauce and sprinkle with 3 tablespoons of the grated Parmesan cheese. Dust the Aluminium Pizza Peel with flour. Use the Aluminium Pizza Peel to slide the pizza onto the Baking Stone, close the lid of the EGG and bake the pizza for 8-10 minutes until crisp and done. In the meantime, roll out the second ball of dough and add the ingredients in the same manner. Pluck the leaves off the sprigs of basil.

Remove the pizza from the EGG and sprinkle with one quarter of the basil leaves. Cut the pizza into slices using the Compact Pizza Cutter and serve immediately. In the meantime, bake the next pizza in the same way and once again, prepare the following pizza.