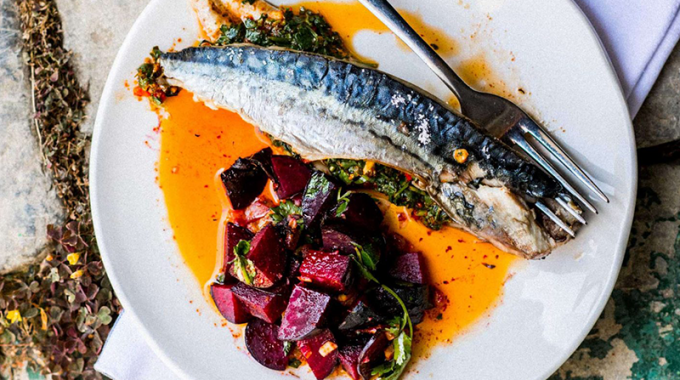 Mackerel’s great at standing up to big, bold flavours, which is exactly why Ross Geach uses chermoula — a kind of North African salsa — to create a beautiful, unctuous and aromatic filling. Then, he tosses some beets straight onto the coals, and throws it all together with preserved lemons, traditional North African spices, and rose water. This is a dish from our summer class down at River Cottage.

Soak your alder board in water for an hour.

Set the EGG up direct with the cast iron searing grid. Aim for a temperature of around 220c. When we add our fish later, that’ll bring the temp down to about 200c, which is exactly where we want to be.

To fillet your mackerel:

New to filleting fish? Don’t worry. This is one of the most forgiving and straightforward ways to give it a go.

Lay the mackerel flat and take your fish filleting knife in hand. Starting at the tail-end, make an incision at about a 25 degree angle. Keep going until your knife touches bone. At this stage, level the knife out again and cut all the way along the spine to the front fin. Flip and repeat on the other side.

TIP: With fish, use as few strokes of the knife as possible. One clean cut is what we’re going for. Otherwise, you could end up ‘feathering’ it which makes for a less even cook, and it doesn’t look quite so good either.

Easy bit: remove the spine, then the head. You’ll end up with two fillets, connected at the top.

Now it’s time to remove the bones. In each fillet, make an incision down the centre from one end to the other. You’re aiming to cut to the skin, but not through it. Make a parallel incision a few millimetres away at a 30 degree angle. The aim here is to remove a central strip, which will give you a gulley for all your lovely chermoula.

Taking care to keep as much meat intact as you can, cut away from your gulley with the knife flat to the fish to remove the bones. Use your fingers to gently feel if there are any left. If there are, repeat the previous step. If you don’t mind eating bony fish, skip this step altogether.

For the beets & chermoula:

Take your baby beets. If they’re fresh, the baby sized ones like we used, simply add them to your coals towards the outer edge. The bigger the beet, the closer to the glowing centre they should be. Leave them cooking dirty for about 18-20 minutes, if using larger beets, cook until the beets are slightly softened yet still retain a firm feel, this could take up to 30 minutes so adjust your timings for the mackerel.

In the meantime, you can start making your chermoula. Finely chop your garlic, coriander and chilli. Add to a large mixing bowl. Add cumin, cayenne, and paprika, a healthy squeeze of lemon juice and your olive oil. Season with coarse sea salt. Give it all a stir.

Spoon a generous amount of the chermoula onto one of your mackerel fillets, pressing into the gulley you made with the back of the spoon. Fold the second fillet on top of the first. Place the mackerel gently onto your soaked alder wood board. Fetch your beets from the coals. You can use one of our handy Grid Lifters to remove and replace the searing grid. Now, add the mackerel on the board directly to the searing grid. Close the lid and leave for 8-10 minutes.

We want to tap into the smoky flavour of the beets as much as possible, so if you’re using small, fresh ones, don’t bother peeling them. If your beets are a bit bigger, wash them in cold water while rubbing the skin away with your hands. Dice roughly, then add to a mixing bowl. Add coriander, garlic, cumin, cayenne, paprika, chopped preserved lemons, and rose water. Add olive oil and season to taste. Give this a good mix.

Your mackerel should be done by now. You’ll know for sure by using a probe: you’re looking for a temperature of 45c off the bone and 50c on the bone. Plate up using a fish slice, spooning on a healthy amount of the Moroccan beets.