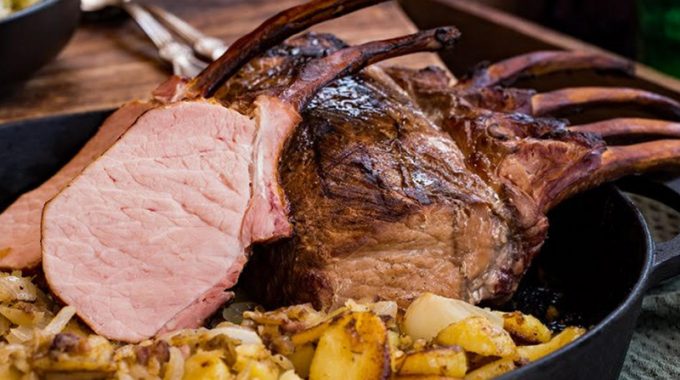 Keep in mind that the pork needs to be brined for 24 hours before cooking and then put it in foil in the refrigerator for another 24 hours. Then the real work begins!

PREPARATION
Ignite the charcoal in the Big Green Egg and heat to a temperature of 150 ° C.
Place 2 Hickory and 2 Apple Wood Chunks on the glowing charcoal. Place the convEGGtor and place the grid in the EGG. Place the pork ribs on the wire rack and insert the pen of the Dual Probe Remote Thermometer into the core of the meat. Close the lid of the EGG and ensure that the temperature of the EGG is approximately 110 ° C. Set the core temperature to 60 ° C and let the meat smoke until it is reached; this takes about 2 hours.
Meanwhile, for the Bratkartoffeln, wash the potatoes and peel and halve the cloves of garlic. Bring the potatoes with the garlic and the sprig of rosemary to the boil in lightly salted water. Lower the heat and cook the potatoes for about 20 minutes until tender.
Drain the potatoes and let them cool slightly. Remove the skin and cut the potatoes into slices about 1 centimeter thick. Peel 2 onions and cut them into quarter rings. Set aside for a while.
Remove the rib from the EGG when the set core temperature has been reached. Remove the grid and the convEGGtor and place the Cast Iron Grid in the EGG. Bring the temperature to 180 ° C.
Place the ribs on the grid and close the lid of the EGG. Grill the meat for 2-3 minutes, turn it a quarter turn and grill for another 2-3 minutes for a nice grill pattern. Turn the ribs over and grill this side for 4-6 minutes, turn a quarter turn after 2-3 minutes. The meat should have a core temperature of about 72 ° C. The easiest way to measure this is with the Instant Read Thermometer.
Remove the ribs from the EGG, cover loosely with aluminum foil and let it rest. Meanwhile, for the Bratkartoffeln, heat the Cast Iron Skillet on the grid. Add the bacon cubes and fry for a few minutes to release the fat. Add the onion and fry until the onion is translucent. Spoon the onion mixture out of the pan and set aside.